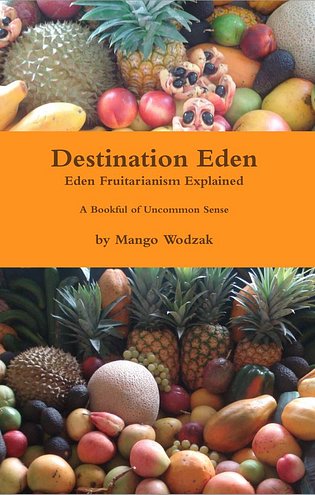 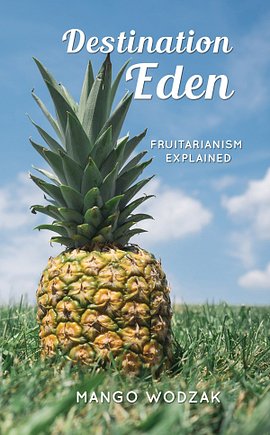 There are however no major additions to the second edition, in fact the first edition is the one kept most up to date! One feature of the book's first edition was totally removed from the second edition though: I had included many inspirational quotes throughout the book, in neat little "quote boxes" to the right of the main content of each page. Vegan Publishers decided that they might be considered a distraction while reading the book (as indeed one or two readers had already informed me to be the case; although to be fair, many other readers have informed me how much they appreciated the quotes too!), and consequently removed them all. There were also one or two other passages that were deemed possibly politically incorect, and thus censored. I.e. removed. Overall though, I have to give them thumbs up for the excellent work they did in making the book more presentable and bug free!

Destination Eden has been translated into several other languages so far.. Italian, Spanish, Serbian, and Czech (not yet published).. Three other translations are currently in the pipeline.. French, German and Portugese.   I will post an update here when they are available.

I initially began working on Destination Eden back in the year 2000. At the time I was hanging out in Thailand, where I'd made friends with a bunch of Buddhist monks who kindly granted me access to their computer facilities. Within a short space of a week or two, I had knocked together a brief skeletal outline of the book, and had already written about 80 pages of content. I felt pretty inspired and could really feel the universe channeling its wisdom through me.

I'm not quite sure exactly how it happened, but shortly after its conception, I got sucked into the idea of creating a web page, and instead of continuing the book with the zest and vigour with which I'd begun it, I began channeling my time and energy into learning HTML and Javascript. Fruitnut.net slowly took form, incorporating  a summarised form of much of the 80 pages I had already written. Over time the website grew clumsy, eventually becoming so disorganised and bulky that it fell into a sorry state of unmanageable disrepair.

During the year 2010, I finally began feeling a certain disappointment from not having pursued my initial idea of a book.. Which I had already christened Destination Eden. I gathered together the old neglected document I had initially written in Thailand, plus many small text files I had gathered notes in over the previous decade, and started rereading through it all. The skeletal outline I had initially drawn  up seemed no longer to be the direction I felt the book should take, but much of what I had written, I still felt contained a message needing sharing with the world, so slowly I began piecing it all together.

It took me three years before I finally felt happy with it, although even now I occasionally go back to it and tweak it here and there. - One of the great benefits of print on demand, is that I am able to update my revised book at any time!

Roughly around the time of initial publication of Destination Eden – Eden Fruitarianism Explained, my website provider experienced a severe disk crash causing all the data from my website to be lost, with apparently no backup! 'Not to worry' I thought to myself, believing I had a copy of everything on my own computer.. For some reason when I uploaded it all again though, I just could not get it to work, the complicated navigational system I had designed years previously, no longer appeared to function. All the knowledge I had invested in months of studying JavaScript to perfect my website had become rusty at the best, and there was no way I felt I would immerse myself once more into it to fix things. So I left it as it was, there but broken, and on my long list of things needing to be attended to.

So here I finally am, in March 2016, completely redesigning the website from scratch, this time using a fancy website editor. The original content has gone the way of the dodo, but not to worry, everything of any value has been salvaged, expanded and included within my books.

May it touch the hearts of many, and bring an awareness where before there was none, and by so doing, allow peace to flow into and throughout the world... in both thoughts and actions!

"Destination Eden – Eden Fruitarianism Explained"  was first published in September 2013. Having examined the options, it seemed at the time that Print–on–Demand was the best way for me to go. I liked the idea that the book would be printed, bound and shipped only when one was ordered, thus avoiding the issue of having hundreds of copies hanging around in boxes. Lulu.com suited my needs somewhat, so I decided to go with them.

However, at the beginning of 2015, on the off chance that they may have been interested, I contacted Vegan Publishers, a U.S.-based publishing house specialising in vegan literature, asking if they would consider publishing my book too. They agreed, and after thoroughly proofreading and reformatting it, released a second edition which came out at the beginning of February 2016.

Destination Eden is the first in a series of four books on the subject of Uncommon Sense. Within it, I introduce the concept of "Eden Fruitarianism", a key feature which must first be understood and practised before we have any remote chance of ever achieving world peace; a state I have no doubt in my mind that everyone in their heart holds with high regard!

It explains how the birthright of which we've all been robbed is lacking in our lives, and what we can all do to help toward restoring a desperately missing sanity and normality.

Although what we eat is a main feature, it's about much more than that, and Eden Fruitarianism is far from being a simple dietary choice. It's more of a lifestyle philosophy which in many ways is so opposing to what the world considers as normal and right, that at first glance some readers will be scratching their heads in disbelief. Push aside all preconceived notions and give it time to digest though, and things may suddenly appear a tad clearer.

More than anything else, this book is a rejection of common nonsense and a call to uncommon sense! A long overdue wakeup call.